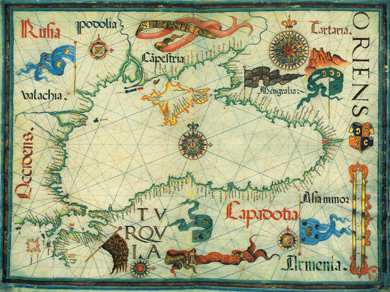 Hitherto artificial modern boundaries have sliced through a region for which the sea was not so much a division as a central highway. The British Academy Black Sea Initiative aims to support and promote study in the Black Sea region within British universities and to initiative increased interaction between British academics and scholars from the countries neighbouring the Black Sea, as well as within a wider international context. While the existing core of existing expertise and practice can be built on, this initiative actively reaches out to a wide range of disciplines (e.g. anthropology, ethnography, geography, history, art history, linguistics, and literature). The promotion of a thematic approach will explicitly expand the academic base while contributing to an inter-disciplinary synergy.

The British Academy Black Sea Initiative [BABSI] began as a three-year programme of research in the Black Sea region sponsored by the British Academy and coordinated by the British Institute at Ankara (BIAA). The aim of the initiative was to lay the groundwork for much longer-term developmet of study in the region. Established in the spring of 2002, this first stage of BABSI came to a conclusion at the end of March 2005. However, the British Institute at Ankara has continued to support elements of the Initiative.
A Web-Based bibliography of academic work about the Black Sea littoral has been prepared by scholars from Turkey, Romania, and the United Kingdom over the course of several years.
Search Babsi Database